Here’s the longest system I can come up with (edit: longer systems have been constructed further down): 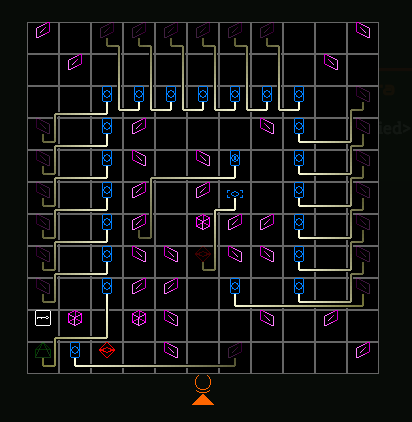 You can ask if it works, my answer is: “theoretically”

2 more systems:
With the same idea as my first system: 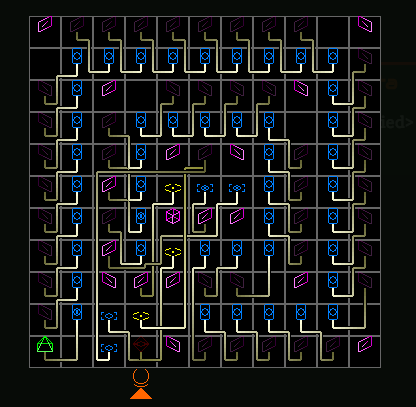 AND FOR THE GRAND FINALE:

I don’t think I’m going to be able to top this system.

Maybe use the nodes that the packets can pass through near the end, attaching it to the goal node? could possibly increase the amount of time needed to do the whole thing all over again. 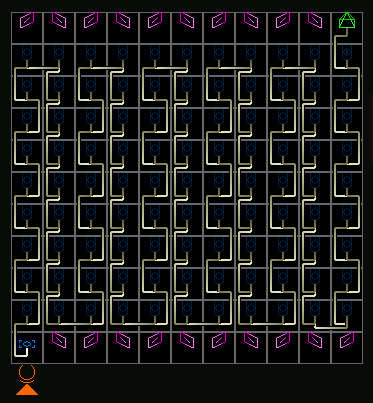 2^100 packets required. If you have 84 sextillion years to spare, you can try it!

I’m sure someone would be able to beat it in less actions than I would, as well as find the quicker solution. I’ve put in two fail-saves that will prevent some issues, but not all issues that could arise. Once I finish, I will need some help deciding which ones to remove to improve security while making it much more… puzzling.

Update: It’s close to being completely done, but I might stick with what I currently have. There’s plenty of open space to add something else, but at the same time, I’d like to work on other ideas that I have.

Note: I don’t plan on making this last too long, but long enough to cause confusion and cause someone to fail to hack the system in the process. There are already multiple ways that one could take much longer in an attempt to speed up the process, as well as some traps that aren’t obvious as well.

Visible key: Saves you from a potential trap that could be fallen into early on.
Invisible key: Takes you straight to the end. However, revealing it is an arduous process, let alone obtaining it.

I can’t hold myself, sorry

First of all there are only 2^99 packets required, not 2^100 (proven with small numbers, then generalised)
Second, making all the operations you have
2^99:
*divided by 60(=minutes)
*divided by 60(=hours)
*divided by 24(=days)
*divided by 365(=years)
*divided by one sextillion, aka 10^21(=sextillions)
*multiplied by 2 (cuz that’s how much seconds a port has to reload)
Double checked , so that results in 40.2 sextillion years, much less than you firstly taught

What kind of small cases were you using? When I calculated, I had 1 blue node needing 2 packets, 2 blue nodes needing 4 packets, and so on. Also as far as I can tell (from when I was making “Readiness”), the cooldown time is actually 2.1 seconds.

You are right, those were the casings. My bad, didn’t consider the root node.
By the way, how is it possible that you completed it?

And also behold the mighty ultimate security by boredom V2 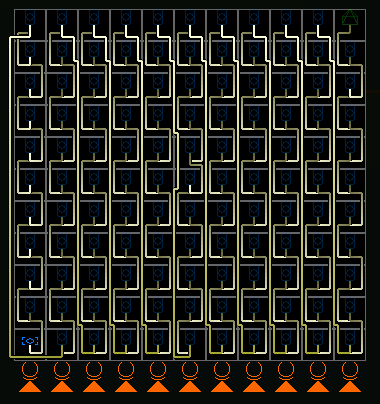 I hate your sense of observation and my lack of it. It’s very hard to find a setup with less than 20 mirrors or extra stuff.

Okay! This is my final copycat creation which after i’ll give up and recognise @CuCN the ultimate boredom security master. So here it is: 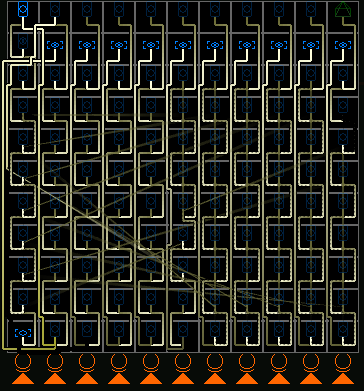 Now sorry but i find it really hard to calculate the complexity of the entire complex because of those blue switches which let packets go through (they are all connected to the bottom-most blue switch on the same collumn). I humbly ask you to calculate the time needed to solve this for the final time.

I could be wrong, but I think that is about 2^23. Each column takes about 10^19 to set up, and after that it’s only one click to “pass” a signal to the next column (hitting the last blue node toggles the first one, but using the previous column to toggle it back opens up the path to the end again). You do have to keep using the first column, but the rest of them don’t multiply with each other.

Hm. Right. Looks like simplicity is the best solution for this thing. I would have loved to work somehow else but meh.