How to do Threading the Needle?

Can’t seem to do Threading the Needle. Decided to take a look at it under quarter speed, still can’t see the timing on it… Is it a glitch or something that must be utilized?

I like that one. The blocker seems to get turned off and on at the same time, but if you time your other packet right, you can get it to go through between them. It looks like a glitch, but it’s just a consequence of how the game handles things that should happen at the same time.

The timing for that sounds extremely tight, even on quarter speed… let alone full speed.

I gave it that name for a reason. That said, the time increments at intervals of 50 milliseconds at full speed (200 at quarter speed), which is 1/4 of the time it takes for a packet to travel one square. That means that the timing only needs to be that close to count as happening at the same time. It’s entirely possible to hit the 50 millisecond window at full speed.

I’m the second (CuCN being the first, but he doesn’t count himself) person to do threading the needle, as well as the second person to even complete the cluster (if not 100%

You’re the first and so far only person to complete that system and the cluster (not counting myself, because I made it).

When I find more time, I will attempt to complete it myself. Threading the needle is my goal for the moment (still doing it at full speed, so that’s a bit of a handicap compared to those slowing it down).

Hey CuCN I see that you tried to change the keys so my completion of your cluster was undone. 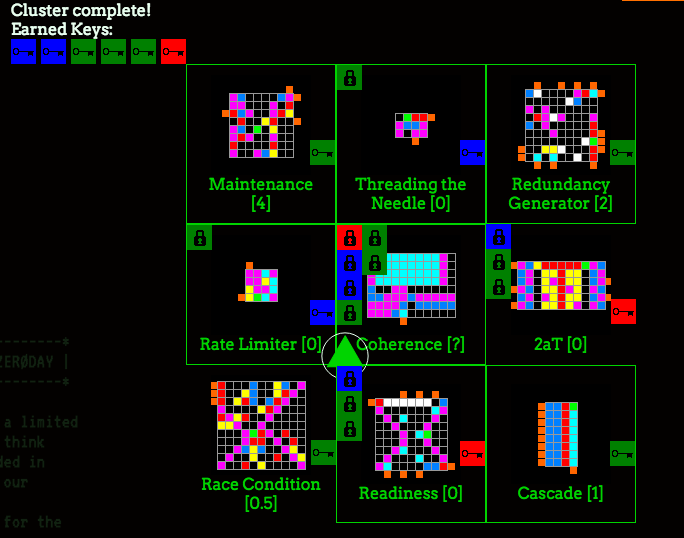 Of course you only motivated me to complete another system of your cluster.

Tips for anyone else trying to complete it here are the easiest systems imo:

Easy blue system:
Rate Limiter (have you ever played a music game? this is very similar :P)